Our neighborhood is full of old favorites. There’s the Churchill Arms with Winston Churchill and other old English memorabilia packing every corner of the pub up front and the tasty Thai restaurant in the butterfly conservatory in the back. Then there’s Maggie Jones, a beloved local joint with a rustic theme and the most delicious pies. The Shed offers farm-to-table small plates for people who travel all over London for the daily looseners; Paul Rhodes is the greatest little boulangerie with freshly baked breads, croissants, cakes and other treats; and David Cameron can be seen lunching at Clarke’s. Of course, there’s our pub The Mall Tavern with the best Sunday roast in town (though we’re obviously biased with its close proximity to our front door).

So it was with much excitement when we learned a pop-up was opening on Ken Church Street this month. We returned from our trip in the US to find Kensington Place, a modern British restaurant with fish from the market next door, had transformed its private dining room to the Notting Gill Chippy! Complete with a summery blue and white awning and maritime theme continuing inside, it was the perfect stop on a Saturday night tour of the town when my mom and dad were visiting last week. My dad had fish and chips on his English must-do list, as he had fond memories of enjoying the battered cod when one of his ships docked in Portsmouth years ago.

We went a little after 9pm, so it was less crowded than we expected, though we should have realized with it being a Saturday night in August. We had ample space and time to talk to the staff (hi, Jack!) about the new chef Tim Peirson, formerly of Angler. It’s slammed on Friday nights (no surprise there) with the after-work, after-pub crowd. The trick is to go on Saturdays for lunch or dinner like we did for less wait. The boys ordered a couple of pints while my mom and I went for glasses of crisp white wine.

We pondered the menu for less than 90 seconds before ordering traditional fish and chips with mushy peas. Within fifteen minutes, Jack returned with curried-spice batter fish and extra crispy chips, served on charming trays with the Notting Gill newspaper. We all agreed it was the best fish and chips we’d ever had! Our bellies were so full that trying any other dishes on the menu will have to wait till another time (I’ve heard the Lobster Thermi-Buns are to die for — though when it comes to doughnuts filled with crustacean meat I think the ones at Chiltern are hard to beat). 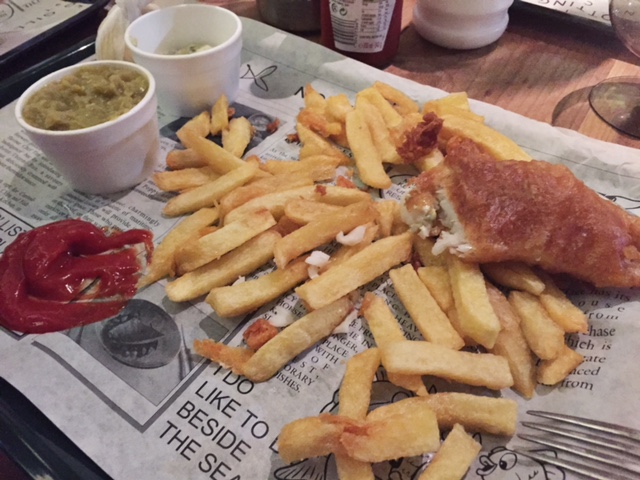 The fish and chips came out piping hot, so we dove right in!

Ps – We’re hoping this becomes a permanent fixture! The idea is apparently swirling around in the owners’ heads, but no official plans have been made yet. The NGC has extended its pop-up until September 24, so if you’re in town be sure to stop by. Notting Gill Chippy, 201 Kensington Church Street, W8 7LX.